The Turning Torso at Malmö in Sweden is Scandanavia’s tallest sky scraper at 86m high.  This iconic building has 127 apartments and every single one is fitted with a food waste disposer.   Sweden leads Europe in the uptake of WDU’s running at 54% of homes having them compared with just 6% in the UK.  They have picked up on the eco-friendly aspects 10 years ago and now they are commonplace.  The Turning Torso is but one example of many.

Most sewage treatment works have been adapted in Sweden to take the higher biological load presented by the widespread use of waste disposers.   Composting is not an option in such buildings and in any case has a lot of question marks over its efficacy.  The big advantage for using waste disposers though is that you can use the sludge generated at the sewage works as a fertilizer in agriculture or by using anaerobic digestors create biogas for vehicles or electricity generators and thus contribute to reducing waste food’s carbon footprint.  Awareness of these benefits has encouraged the take up. 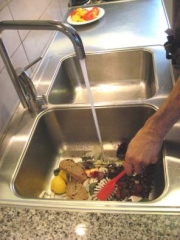 Another advantage is the reduction in skips needed to remove the weekly waste from the building which have been reduced by an estimated 35-40% as a result of installing the WDU’s.  With ever spiraling landfill costs  this provides a welcome savi

The story of the Turning Torso is not only an iconic success for the country but also for the adoption and use of waste disposal units in large blocks of offices and apartments – a message that architects in the United Kingdom and the rest of Europe need to hear!ng in service charges for the residents.